Mike Strong’s life thus far has been so blessed yet battered, so fulfilling yet storm-tossed, he had to pause and write a book about it.

With the book “Strong Getting Stronger: An Inspiration” behind him, the Air Force veteran has thrown all his zeal, energy and creativity into making CHEP a national standard bearer by achieving an 82.6 percent success rate for transitioning homeless vets to independent living in the Washington, DC area. 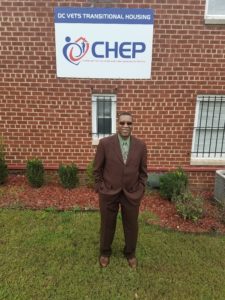 Born on a South Carolina farm in 1961 and raised in a blended family of 16 children, Michael Strong learned to work as a team during a time of extreme racism.

“We farmed to feed ourselves,” says Strong.

He recalled that while his father had only a fourth-grade education and his mother just twice that, a premium was placed on education in the household.

“Four of my siblings became high school valedictorians,” he says.

Seeking new horizons, Strong found Air Force acceptance at its Fort Jackson, SC entry point and then whisked off to Lackland AFB in Texas. He spent eight fruitful years, culminating in his becoming a data systems analyst and writing a program that saved time and money for the entire maintenance group at Wright-Patterson AFB.

After mustering out, Strong found employment in his field, topped off his education online,
married and became the father of two.

In 1995, he became aware that his life was spiraling out of control as he began to develop a dependence on alcohol and cocaine. Yet he hung on. He became a Network Administrator for the Baltimore City Department of Health. He lived large. Seven years later, he hit rock bottom.

Says Strong: “I looked at myself and said, ‘I surrender.’”

He had lost everything and was now homeless. Strong was referred to the Maryland Center for Veterans Education and Training in Baltimore where he spent 33 months rebuilding his life. While in recovery, he was offered a job in the local Bank of America mail room. After accepting, his old hustle resurfaced, and he applied for and got a credit analyst position that required a North Carolina.
relocation.

Strong took a part-time job with a consortium of 125 churches known as the Greensboro Urban Ministry in Greensboro, NC. He liked the connection with people and discovered his “special knack” for networking with other groups to affect a solution. He was motivated to get a degree in Human Services Administration and apply for and get the full-time shelter manager/supervisor job offered by the ministry.

He flourished. Strong wrote emergency shelter policy for over 100 persons in residence. In addition, he partnered with the likes of the Salvation Army to provide transportation, medical and job opportunities for all vets seeking treatment and counseling. Strong was instrumental in getting clients with assistance for food and clothing banks, community kitchens, emergency assistance and rentals among a wide variety of services.

Since fifth grade when his 4H leader used to drive him around the South Carolina to compete in speaking competitions, Strong has relied on speaking before groups to achieve aims. On his road back to recovery, advocating for homeless veterans put the wind beneath his wings.

He was fearless in insisting on his unique intake style of admitting veterans into his program who counted as the most difficult cases. Along with forging strong ties with other organizations to supply an array of homeless services.

Strong’s CHEP association began in 2013 as Program Manager of DC Vets Transitional Housing, but in recent years he has been designated Housing Manager. As such, he has written a proposal to acquire a CHEP van to provide critical transportation; developed flourishing local partnerships that target veteran’s needs; increased community volunteerism and a higher national profile that resulted in 40 persons flying in to join CHEP in honoring Veteran’s Day; along with an increased access to housing for veterans in Southeast Washington.

“There are two words we should never allow to be mentioned in the same sentence – they are ‘homeless’ and ‘veteran’,” says Strong.

Strong is a member of the District of Columbia’s Veteran’s NOW Committee, President of Kirstin’s Haven Board of Directors and the Prince George’s County Veterans Stand Down and Homeless Resource Day Executive Committee member. In 2013 he was given the University of Phoenix Community Service Award.

Mike Strong likes to quote Edith Wharton who said: “There are two ways of spreading light; to be the candle or the mirror that reflects it.”